Why The 90s Was The Best Time To Grow Up | EmmyWritesAbout 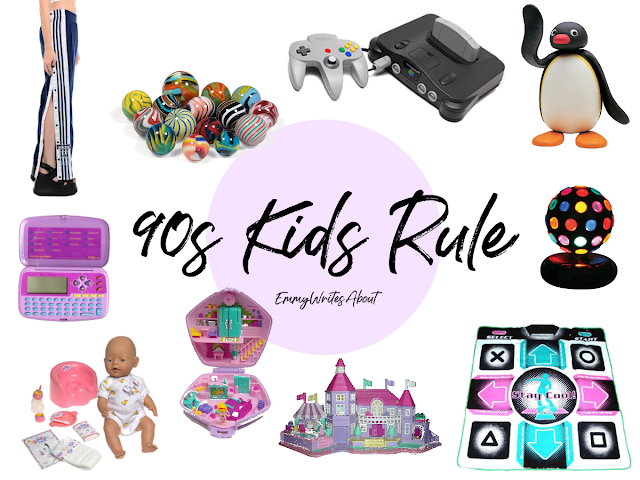 When you look at kids and children now I think wow I am glad I grew up in the 90s. I think  now it is all about electronics and social media but when I was young it was about being out and making your own fun. I find nowadays most kids sit in and play on the x box or sit on their phones but when I was young I was hardly ever in. There are certain toys and memories that made my childhood and I know alot of you will remember them.

I look at my nephew who is 10 and he has a phone and uses whats app and Instagram and im like to me it isn’t right. I didn’t get a phone until I was about 13 and even then I only got a certain amount of credit a week and it was mainly to call my mum if I was stuck anywhere or for them to find out where I was. I was born in 1992 and I am glad I was a 90s child as it was so much fun.

Some of my favourite things from the 90s…

Popper Tracksuit Bottoms – now these bad boys were incredible… Yes I now look at them and think they are hideous but in the 90s everyone had them! The popped all the way to the bottom then you could un pop them.

Marbles – I remember playing with kids on my street with marbles and whoever won the game got everyone’s marbles. I used to collect them.

Nintendo – Remember slotting the game into the console? Spyro and Sonic were my favourite games! Although on Spyro I would mainly just fly about.

Pingu – Good old Pingu the TV show… they didn’t speak just made a noise and his dad would always be ironing clothes even though they never wore clothes. Haha!

Electronic Diary – I remember this so well, you had to make a person who looked like you then it was your diary.

Baby Born – I remember wanting this doll so bad when it was released and I think nearly every kid had it. I loved buying outfits for it. Who else remembers when you gave it water, it would run through and wet the nappy!!!

Polly Pockets – Now these were my ultimate favourite toys from the 90s. I had nearing a hundred of them. My dad hated them as I would set up every single one in our front garden and make a town and he used to always stand on the little people and it killed his feet!

Dance Mat – Now you get the electronic ones in arcades but now these were so much more fun. I still remember opening this on Christmas Day then after that I went on it everyday!

Disco Ball Light – Now this is where the party happened hahaha. I was young, I would turn my big light off and put my disco light on, play the spice girls and sing into my hair brush! 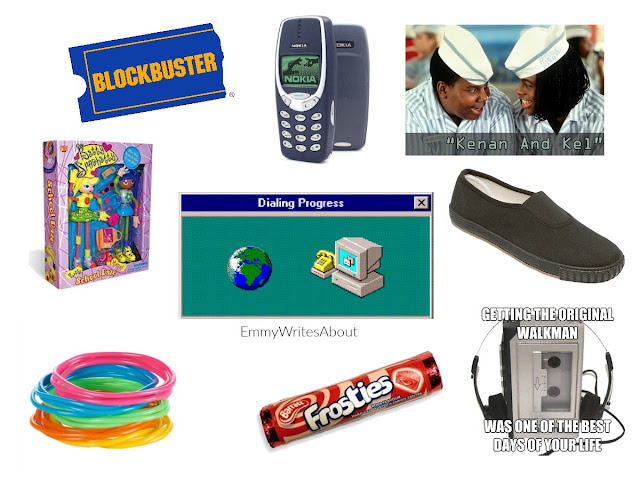 Blockbuster – who remembers being taken to Blockbuster on a Friday night to go and pick one film to watch over the weekend!

Nokia 3210 & 3310 – My first ever phone.. you could only play the snake game on it, it was black and white and that was it. This phone was unbreakable, you could throw it, stand on it and it would still survive.

Kenan & Kel – One of the funniest shows going. I was obsessed with watching this after school.

Betty Spaghetti – How cool were these! They had hair like spaghetti. They did try re making these years later but they just aren’t the same.

Shag Bands – Ok I don’t know the actual name for these but in primary school everyone called them shag bands. Everyone wore them just because every one wanted them then a rumour started if someone snapped one it got called a shag band. No one ever did it because we were young and it was a word people just learnt and probably didn’t really know what it meant.

Dial Up Internet – This is one I don’t miss. Remember having to make sure no one was on the house phone so you could use the internet.

P.E Pumps – Everyone worse the same exact pumps, I don’t know if they still wear the exact ones now but I hated them as a kid.

Frosties – These sweets were insane! I always used to go to my local shop to get some. They were hard but they tasted of strawberry.

Walkman – Hell yes, walkman’s were legit what everyone wanted. I remember having a tape that was the smurfs singing!!

What Was Your Favourite Thing From The 90’s?

Have You Never Heard Of Some Of These?